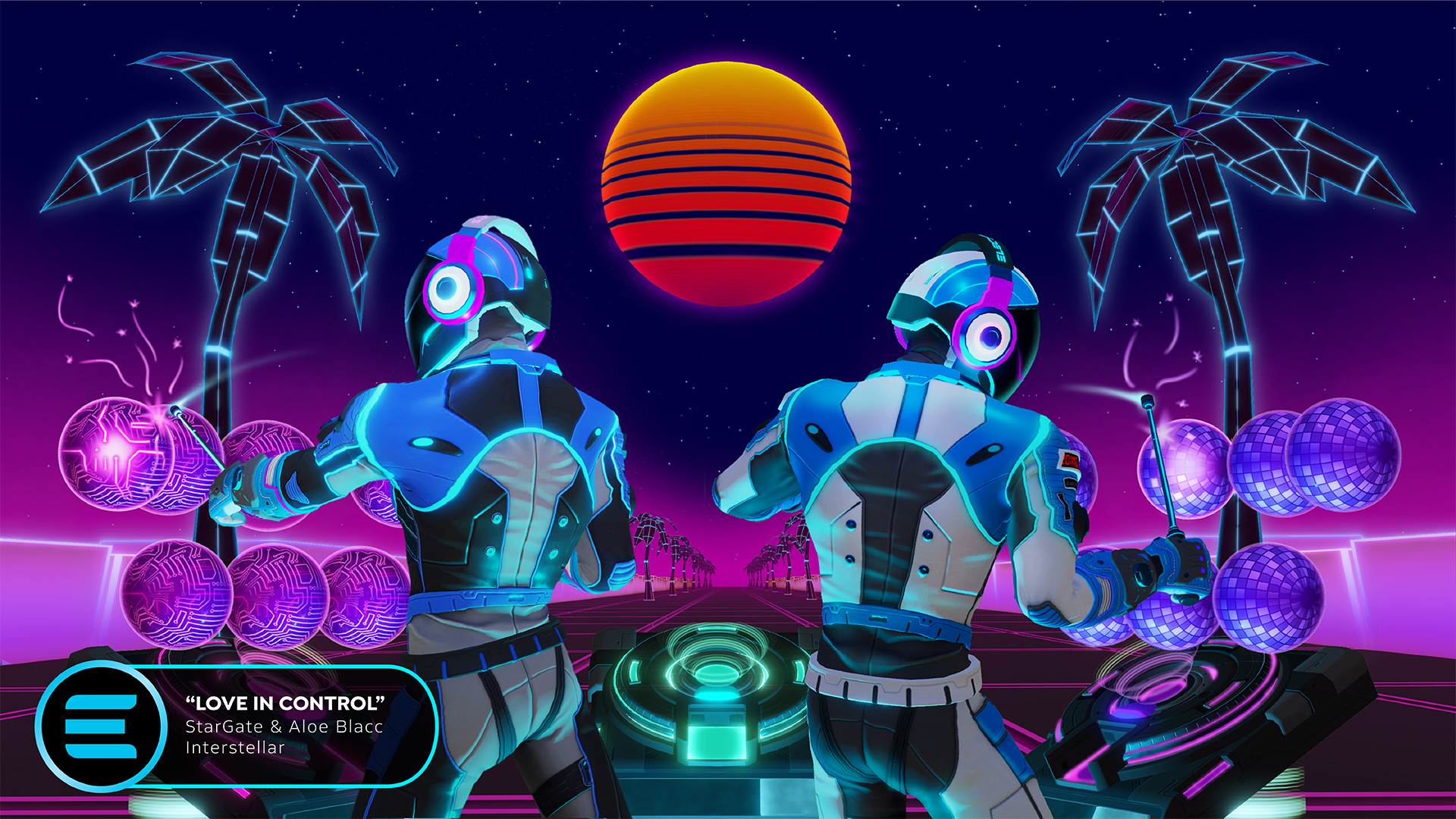 Electronauts is what happens when you spend your days in work, school, at the grocery store, etc. daydreaming about being a space DJ, and Survious Entertainment answers your prayers in the form of a VR Experience. I hesitate to call it a game because of the lack of a particular objective or progression, but it's an experience to the fullest extent. The app places you in a mobile sci-fi environment with a number of tools to remix any one of the 80+ electronic and pop songs on their jukebox and lets you play your heart out.

It's a sandbox experience that lets you remix your favorite songs in real time, and the strongest element of this app is the fact that it's nearly impossible to make anything sound bad. Throughout all of your interactions there is an invisible hand holding process that keeps beats in time and carefully times the introduction of loops to come in at the perfect moment. Through the suspension of freedom of any note being able to be played at any time, the user is granted the freedom to move in any way that feels most natural to them.

The control system consists of the user having two drumstick like rods in both controller hands to be used to press buttons, drum on drummable objects, and navigate menus. Larger menus (the start and pause menu) are navigated with a hand rays type interaction. Otherwise, the two drumsticks approach is a highly effective way of letting the user understand how they are supposed to interact with their environment as there is only one way to active an interaction: hit it with the drumstick. All interface elements are within a comfortable turnable radius and if you are unsure of what something does you reach out and hit it with the rod. It sounds primitive like a child playing with blocks for the first time, but this kind of interaction through physical collision for the purpose of learning creates a delightful experience.

In any instance where a button is difficult to read or a symbol is unclear, the issue resolves itself quickly by the practically nonexistent cost of clicking the wrong button. Additionally, if you do click the wrong button, clicking it again will cancel whatever you just cause to happen. I.e. if you start a musical loop by accident, clicking the button again will cancel the loop.'

Some of the in app interfaces themselves adopt a sleek, blocky look while others take a more abstract approach. Most of the menu buttons are essentially extruded blocks such as the option to start a loop and instruments to add in, but the "play orbs" that your drum on are floating spheres and to add vocal backing you slide a bar that creates an interaction similar to filling up a lava lamp. Additionally you can throw what can only be described as "musical grenades" up in the air to activate sound effects like airhorns and whatnot.

Electronauts can be played either sitting or standing and while most elements feel intuitive and accessible, you will encounter a moment where an object is just out of reach requiring you to shift your position/environment to better interact with it.

The visual elements of Electronauts are consistent and generally what one would expect if you told them it was a kind of sci-fi DJ experience. The only weakness is that the many greys and blues of the environment can quickly feel repetitive. The visual environments change between the songs you play, but nothing really fundamentally change up the visual experience after the 15th or so song. It's delightful and exciting but like similar experiences the spectacle wears off over time.

In conclusion, Electronauts is an experience that's fun and especially exciting if you've ever wanted to be a dj but lacked the musical skill to get into it. Where something like this could potentially turn into a frustrating trainwreck of missed notes, the excellent quantization system and thoughtful decisions by Survios create an app that lets anyone playing it walk away with the feeling that, just for a moment, they were the headliner for whatever space Coachella would look like.